The purpose of this page is to test new content and capabilities.

The term CASF was deleted in late 1940, and the term Canadian Army (Active) was used to represent full-time military units.

The Canadian Active Service Force was officially mobilized on 1 Sep 1939.

The Essex Scottish Regiment and other regiments of the Second Canadian Infantry Division assembled their troops at Camp Borden, Ontario in late May, in preparation for shipment to England. Henceforth, Harry William Manchester’s letters are sent from Camp Borden.

Harry William Manchester arrived in England (probably the Aldershot garrison) on the afternoon of August 3rd.

These sober-faced lads, Harry Manchester, 13, and Wilbur Rigg, 14, were saved from drowning at the Bridge Avenue Bathing Beach yesterday afternoon, a few seconds after another lad, Lloyd Rigg, 13, had sank to death. The boys had been playing on a raft. Almost exhausted, they were pulled onto the diving board by a male bather. Wilbur tried to rescue his brother, but his strength was not equal to the task.

Harry William Manchester informs his sister, La Verne Woods, in his August 23rd letter, that he is now working in the Military Police.

The notification that Harry William Manchester was being held as a prisoner of war (POW) came through the International Red Cross in Geneva, Switzerland. The handwritten notes (below) were in Harry’s correspondence archive held by his sister, Mrs. Elton Newman of Cottam, Ontario.

The initial notification to Harry’s family that he is being held as a prisoner of war in Germany:

Sir: I have copied a letter from Cpl. Harry William Manchester, Stalag VIIIB, Germany, to Miss Onnellee Rewis [Reive], Kingsville [Ontario]. I wonder if you would please print it in your paper, so everyone may be thankful for all they’ve done for our brother while he is in Germany

This is my first chance to write you this month, so you can imagine how anxious I am to get at it. I have received quite a number of letters this month, also four Christmas cards. A lot of letters from you. I also received 1,000 cigarets from the Windsor Smokes Fund and received my first personal parcel February 11.

Please thank your grandmother and everyone else who has helped to make my existence here comfortable and happy. I would like to write to them all individually but writing paper does not permit me. Things aren’t too badly now with our little group of 17, but being a new working party, the supplies have been short as it takes them quite a while to come from the Stalag. The wood is all pine and spruce and quite small, so it is not too hard, but healthy.

I have had a lot to do for myself, being the senior N.C.O. and commander of the party. It makes extra. It seems that every night I have to get the interpreter and get something thrashed out which takes lots of brain work in a place like this. But I must not complain though, as it is such a relief to be unchained. I guess I will have to bring this to a close for this time, so again please than everyone for their kindness.


More than 230 men of the Essex Scottish Regiment previously reported missing in action, following Dieppe are now listed as prisoners of war, according to information being received by relatives here from the International Red Cross.

Telegrams are continuing to arrive at homes in the Windsor district, bringing the glad news that a son or husband is alive—somewhere in Germany.


Over 500 members of the regiment were reported missing after Dieppe. Reports to date indicate that at least half this number were taken prisoners. In estimating the number of Scottish held as prisoners, allowance must be made for the fact that the families of some Scottish members do not live in this district and The Star as a result, has not yet been advised of word received through the Red Cross.


For the purpose of maintaining a complete list of men of the regiment now prisoners of war, Lieutenant-Colonel McCorkell is anxious to have complete details of name, rank, regimental number, prisoner number and name of the prison camp.

Included in the list to date are 24 officers of the regiment. Major John A. Willis, reported “missing, believed killed,” and Lieutenant Alfred Douglas Green, reported missing, have not been reported prisoners to date. Another Scottish officer, Lieutenant James Palms, of Detroit, was reported killed and reports of the attack contained special mention of his bravery as he led his men up the Dieppe beach.

Other Windsorites who were with the Royal Canadian Engineers in the Dieppe raid were reported as prisoners today.

New additions to the list of prisoners are as follows: 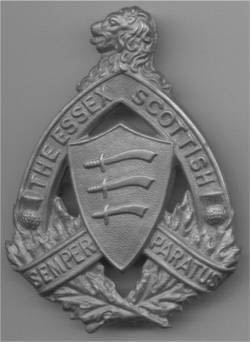 Regiment adopts Highland dress and is renamed the Essex Scottish (High­landers) under the command of Lt.-Col. Alan Prince, great-grandson of Col. John Prince. The official tartan is the McGregor, named for Lt.-Col. Wal­ter McGregor, whose family founded Ford of Canada and who supplied the funds for the new uniforms. The regi­mental crest has a red shield with three white sea axes — symbol of Es­sex County, England, the motto Semper Paratus (Always Ready) and a lion’s head at the top. The Highland Laddie is the regimental quick march.

With this letter, Harry William Manchester enclosed several information cards distributed on the transport ship for the Trans-Atlantic crossing. These cards rendered important information about the timing and details of that crossing.

Life of M.P. Is Busy One

A Work In Progress